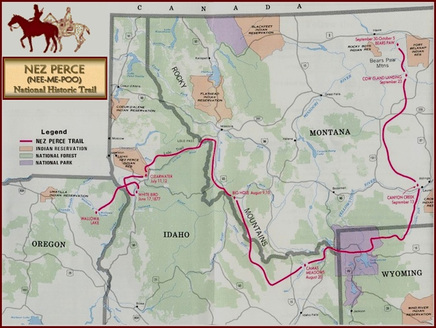 This trail covers much of the area in which the Nez Perce lived
This website is dedicated to the Nez Perce tribe of North America and the history of their lives. Here you will be able to to find out about their culture, beliefs, daily life, family structures, who had what role in the tribe, the way they governed, their ways of entertaining themselves and so much more. You will also discover how the Nez Perce people impacted the settling of modern- day Montana, Idaho and Oregon. The Nez Perce called themselves the Mimi'puu which means "the real people" or "we the people"; showing how they viewed themselves among the tribes that lived around them.
As you read, imagine being one of them when they met Europeans for the first time, what it felt like to have their homes taken over by the settlers who followed, and how their lives have had to change. Imagine what questions they may have had when the white settlers failed to follow through on their promises, and how this would have caused tensions between them. Imagine what it would be like to have your identity taken away by people you don't even know and have never met.  This website will give you some of these answers, and reveal more of the life that these people lived. So, sit back and enjoy this study over the life and ways of the Nez Perce tribe.